What you see above is a sample scorecard for the first (cue trumpets, please … )

Here’s how it works, in a series of bullet points:

(2A. Obviously, any score sheet will do. Scratch paper is fine. The actual scoresheet above is not mandatory; it’s just used for illustration purposes).

`*This is totally not true

I suppose there’s no real need to “sign up,” like we usually do. We won’t need to make a schedule or finalize any brackets, etc.

But, if you feel like it, go ahead and post something quick if you plan on completing this challenge.

Good idea, and thanks for getting this going. This kind of thing I am onboard with.

I usually play(ed) this game with 3, which worked well for my friends and I. The thing is, different armies play very differently at different player counts. I may use this challenge as an opportunity to play some of the armies that don’t work as well in a 3-player game - Dancer, Doomsday, NeoJungle here I come!

I’ll give it the old college try … what’s the lowest possible score one can get?

You get no points at all if your HQ is destroyed … so 0. Nine times.

If it makes anyone feel any better, I’ve been doing some totally random AI games since Wednesday or so. I’ve been winning maybe one out of three. It’s embarrassing.

I haven’t played the app in ages but I just played the physical game last weekend. I played Sand Runners and had no idea how to play effectively. I may be right there with you all, struggling against the AI.

Okay, I’ll start us off.

I played Steel Police (probably my favorite) and faced New York. And, in one of the most baffling AI performances ever, I got a pretty easy win.

This was on Easy — I doubt I’ll score this high again.

I’m in. Haven’t played this since the mp worked… so this should be interesting!

faced (easy) Vegas with Steel Police (not my favorite) and had some problems with all these Vegas trick plays (bribery and many movements). low score 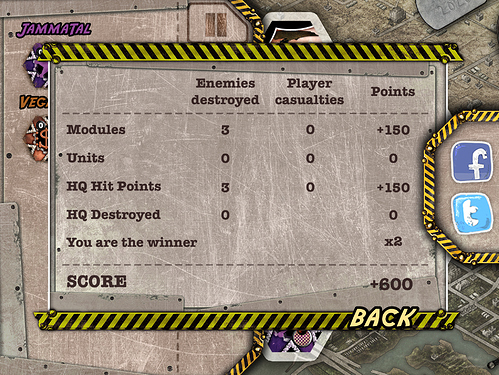 board control in the end, but too late, and HQ kept escaping me. 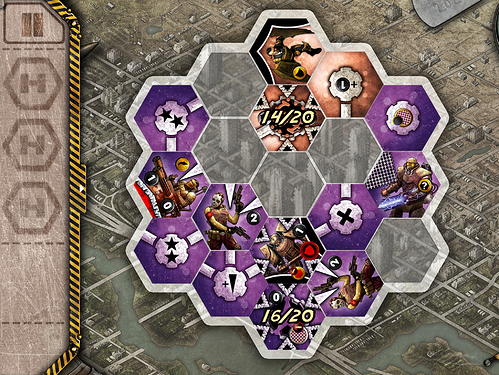 many mistakes and errors after years of NH inactivity.

i had encircled enemy HQ with reflection units (jugde) for dealing reflection damage (“Reflects enemy tile attack in opposite direction at distance of one field. Reflection can harm enemy Unit, Module or HQ.”)
but d’oh. HQ couldn’t damage the Judges, but no reflection damage dealt to HQ

attacks by HQ no “tile attacks”? 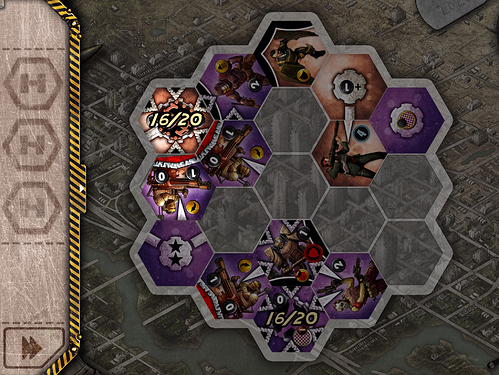 I would have fallen for that mistake, too. I took a deep dive to an 8-year-old BGG thread to look at that. The claim is that in NS Hex, HQs cannot attack each other. The reflected attack is an HQ attack which, per that rule, can’t damage the HQ. The thread that I read does say that the iOS app tries to clarify that somewhere. Makes sense, I guess, but like I said, I would have done exactly that.

I’ve been re-reading everything, too. Coincidentally, I just got through the passage about HQs never harming each other.

Okay, second one done at Easy. Again, some poor play by the AI.

I am going to get killed on Hard.

Put me down for 2,000, playing SMART and beating Uranopolis. 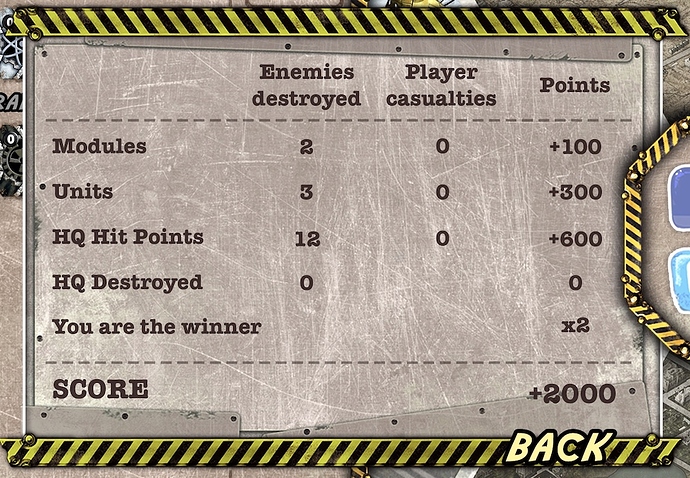 My first game in easy was an absolute massacre. I was NeoJungle and the e random AI was Doomsday. His HQ was in that location on the bottom left and as you can see, I was hitting him for at least 8-10 per battle with the net to keep me safe. It was over very quickly.

Edit: Why can I upload the score, but the image of the board is saying the file is too big? They were both screenshots of the same game… 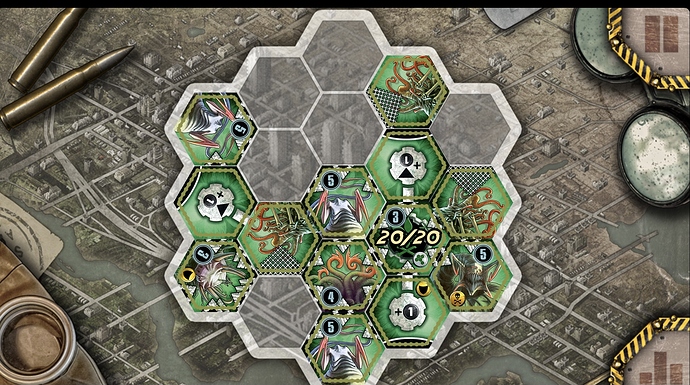 Just cropped it a bit…

NeoJungle has long been one of my favorites, though it’s effectiveness is greatly diminished in 3+ player games.

The reflected attack is an HQ attack which, per that rule, can’t damage the HQ.

and i thought the reflection would convert the “HQ damage” to “Judge damage”. but obviously not so.
so only range damage by another unit (“passing through” its own HQ) can trigger a reflection damage effect.

that “Reflection can harm…enemy HQ” rules info on the Judge’s ability lured me into the “HQ encircled by reflection units” maneuver in the first place. grummel brummel…

the app just wanted me to give a review on appstore.
ROFL