We’re not huge fans of hyperbole here at Stately Play–the best damned site in this or any other universe–but when a game like Meteorfall shows up, it seems appropriate. Meteorfall is good. Dare I say, super-duper good. So good, in fact, that I’m sticking it in the running for Game of the Year and it’s not even the end of January yet. Why am I telling you this? Because it’s a review, dummy. [Dave fell on the ice, hitting his head on the concrete yesterday and has been calling everyone–even his wife and kids–“dummy” ever since. We’re hoping the concussion symptoms go away soon but, until then, please take no offense. -ed.]

Meteorfall is a deck-building roguelike which seems to be a thing lately. Much of my time lately has been spent playing Slay the Spire on my laptop–another game mixing these two genres–but it’s been replaced by Meteorfall on my phone. 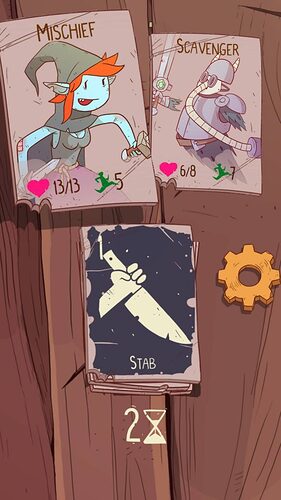 Meteorfall has you pick between the four archetypical fantasy RPG classes and go on a romp until you either beat the Big Bad or die trying. Your class determines your starting hand of cards, and you’ll pick different locations to explore, each with its own boss waiting at the end. Each location has its own deck full of monsters and monsters and monsters. You might even fight a monster or two. It’s not all fighting however, you’ll also fight monsters. [Did we mention that Dave has a head wound? -ed.]

Seriously, it’s not all fighting, but combat is the gooey nougat center of Meteorfall and, luckily, it’s real tasty. Playing each card from your deck costs both Time and Stamina. Time replenishes each turn, but Stamina needs to be replenished via discarding. Thus, when a monster appears, you draw a card and then swipe it left or right, Reigns-style. Right means you’ll use that card’s ability (costing both Time and the Stamina cost). Left means you’ll simply discard the card without using its effect, gaining some Stamina (you’ll still spend Time, however). This back-and-forth of either using cards for some effect or discarding them to build Stamina with the hopes that some of your bigger hitters come out is the meat of the game. There’s nothing worse than using up your Stamina by playing a weak-ass attack card only to have that sweet new card you just bought pop up next with no Stamina left to execute it. Once you’re out of Time, the monster gets to throw down cards and try to bash your skull in. I don’t recommend this. 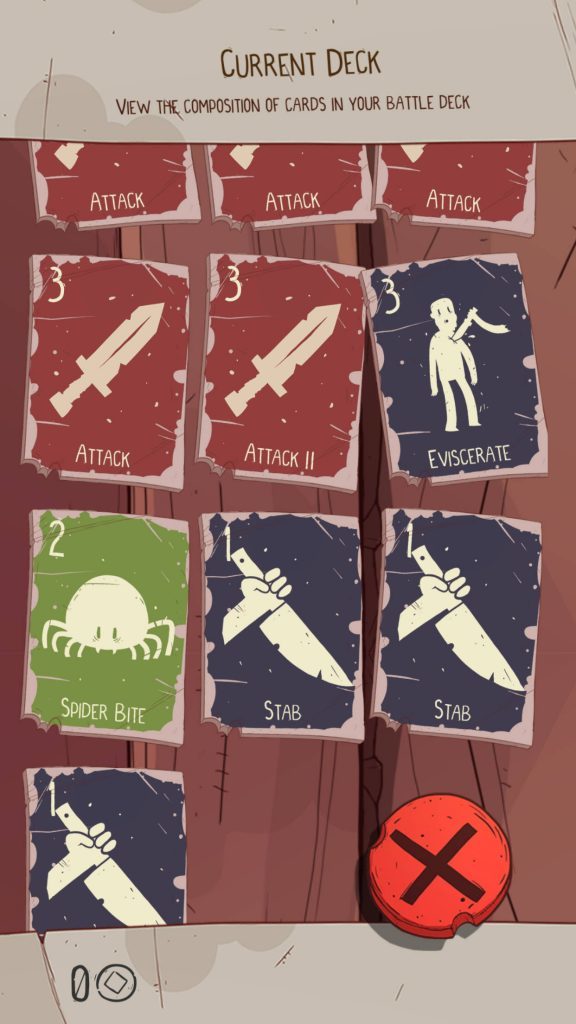 Killing critters earns you coins used to upgrade cards at the Blacksmith or cull cards at the Temple. If you’re lucky, you’ll stumble across Shops which allow the buying and adding of cards to your ever-growing deck. You can also stumble onto Treasure which will offer you a chest with new cards free for the taking. You might even come across random events during your journey, adding a bit of “where the hell did that come from” to your card collecting. As time passes you’ll craft your deck into a finely honed weapon or, if you’re me, into a bloated mess of ineptitude. 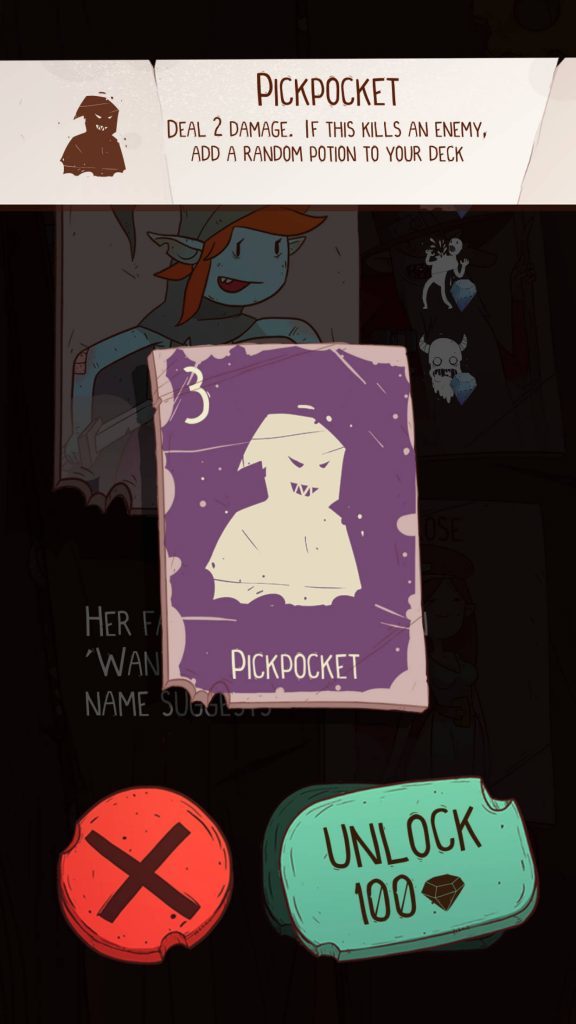 Each location has a certain number of encounters you must face on the way to that area’s boss, with each fight offering you the ability to flee or stay and fight. Fleeing will allow you to rest and get some HP back at the cost of forgoing whatever coin the baddie was holding. Whether you fight or flee, however, you still move one step closer to the boss. Flee too often and you’ll not have had enough time or money to upgrade your deck and the boss will do with you as they please. Win some duels and you’ll earn gems to buy cards you can permanently add to your starting deck for future runs.

While the gameplay of Meteorfall is rich and addictive, that’s not all there is to love. The game has a comic art style similar to last year’s Miracle Merchant. It’s not the same artist, with Meteorfall being drawn by Evgeny Viitman instead of Miracle Merchant’s Thomas Wellmann, but both have a colorful, playful style that draws you in and immediately indicates that you’re here to have fun and chew bubblegum and, you guessed it, we’re all out of bubblegum. 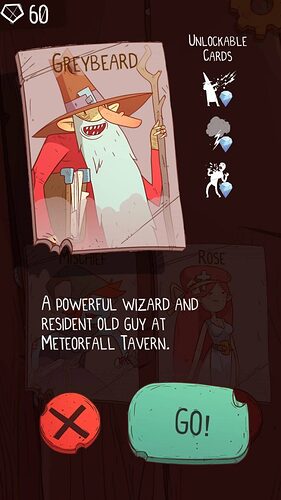 Meteorfall is one of those perfect mobile titles that begs you to play it for a few seconds while waiting in line at the market, or for hours while planted on your couch. The roguelike nature with a clearly defined end (killing The Lich, a creature I have yet to come close to even finding) give it that, “I’ll just try one more time” feel that most games don’t manage to pull off. If the year ended tomorrow, Meteorfall would take top honors. Of course, we have a lot of year to go before we start voting, but it’s going to take something special to knock Meteorfall from its perch.

I think I’m going to have to give this one a try on the hype factor alone. You’ve all convince me.

The art style absolutely screams Adventure Time, even to someone like me who’s only familiarity with the show is from screenshots on the internet.

That’s a lot of pressure…

I think I’m going to have to give this one a try on the hype factor alone. You’ve all convince me.

I’m in agreement with you, but I’m going to hold off on trying this one. (Maybe I just suck at these games.) I played Solitarica, but didn’t care for it. This seems similar in that you play through areas until you get to the boss, but in this case you have more control over your deck.

I was hoping it was closer to Frost, which I did like, but it is so brutally hard that it’s not much fun anymore.

Well, Solitairica (and Card Crawl) aren’t deck-builders, so there’s not a ton of strategy. You’re beholden to what’s drawn. Here you build your deck as you go, so winning and losing is squarely on your shoulders.

I enjoy both CC and Solitiarica, but I classify them as “games to play while doing other things”. They don’t require a lot of brain power, but are still a fun puzzle to figure out. Meteorfall has more…meat. I’d say it feels closer to something like FTL than Solitairica, but its so different gameplay-wise from FTL I didn’t want to say that in the review. Mainly because I’m a coward.

My only beef with Solitairica (and correct me if I’m wrong) is that you can’t stop in the middle of a run. At least I seem to remember that my run disappeared when I left the game.

Given that people have mentioned “things to do while waiting in line” for it, I wonder if I was missing something.

No, if you shut down the app for Solitairica and start it back up, you go back into the game you left.

This sounded promising, so I have bought it. Thanks!

Yeah, I’ve seen the same with Solitarica. It saves wherever you were, but if you exit before defeating an opponent, you’ll have to fight them over from the beginning.

Yeah, I’m not sure what happened with me, or how I got that impression.

It works fine for me now.

Maybe it was changed in an update.

I love games of this ilk, but Dream Quest is far and away my favorite. It has challenge to spare, yet rarely feels cheap or unfair. And each playthrough is vastly different, even after hundreds of games.

Card Crawl was fun while unlocking stuff, but then you run out of things to do fast. As far as I am concerned it exists for exactly one thing after that: the Daily Dungeon. I have played hundreds, and still come back almost every night. It is very lame how there is nothing to do with money after you get all the cards, though. DQ and Solitairica avoid this by making it so even once you unlock everything (which takes much, much longer), achievement points/Wildstones can still be used to buy continues, allowing them to remain valuable indefinitely. Card Crawl sorely needed that, and they never fixed it for Card Thief or Miracle Merchant either.

Solitairica is fun, and tough at times (albeit not the final boss; he is definitely no Lord of the Dream, and is a pushover even in Epic Mode). But it can be more of a grind than the other two, especially in Epic Mode or when using the new classes.

I’ll be curious to see where this new game stacks up compared to the others.

I haven’t played this a ton yet, but so far I’m a bit disappointed. It feels like a very poor cousin to Dream Quest: extremely linear, with far fewer options and far less control.

I wonder if I’m enjoying Meteorfall so much because I’ve never played Dreamquest?

Will have to go check it out.

That said, I do enjoy the stamina/attack mechanism. And the “linear” play doesn’t bother me at all. You can skip monsters.

So yeah, will play to win with the other classes, but below is my final warrior deck. 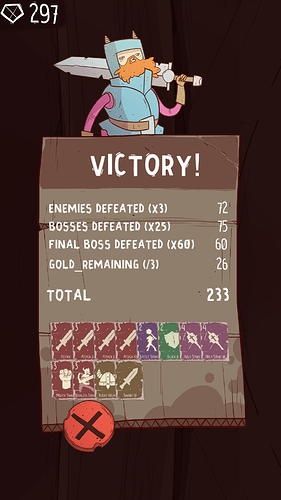 Damn. I really suck. I’ve only gotten through 2 bosses once. I usually end up dying to the 2nd boss.

The rusty iron helmet was the mvp by far; being able to ditch your cards for armour to hold out for holy strikes was a clean way to keep your hp high.

Always went for hp on level up and not stamina

Yeah, I have yet to see a reason to take stamina over health when leveling up.

Finally got my first Bruno win, but I’ve been playing since the beta and had all of his special cards unlocked, which certainly helped. I’d like the ability to disable the special cards to raise the degree of difficulty.

@Neumannium Which characters have you used? I haven’t played with Rose yet, but I found Greybeard the easiest of the other three to use by far.

Yeah, Greybeard was who I beat it with first, then mischief. Stamina was super useful for her, but it seems like health is far more important for Bruno.

I go a very different way with Bruno, all stamina and maximize offense.
Most monsters die on the first or second turn, and I almost never discard a card.
Here’s a run I just did, ended with 63 hp and 20 stamina, the lich battle took 3 turns.
Usually I have more than one charge in a Bruno deck, but the treasure gods weren’t kind to me this time.
Charge -> Veteran’s strike is the ideal combo, and Hearty is an all-star defensive card.
Save all gold for blacksmith. Its hard to see, but those are all level 3 cards except charge and stab, which are level 2. 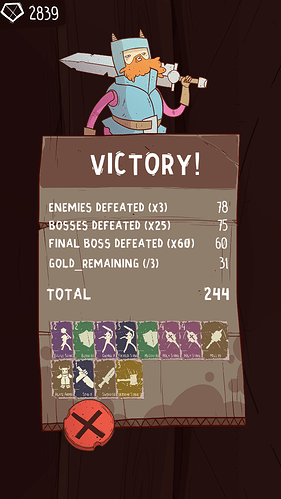 Same idea with Mischief, except she is more risky, with better damage potential and less innate defenses. Finding a sword with Mischief is awesome though.

My last Bruno win was all about that Charge/Veteran’s Strike combo. I had two of each and just rolled over enemies. I also didn’t have to worry about stamina, though, as I had Taunt and a couple of Bramble’s Fortune cards in my deck.

The dev announced on Twitter today that a new character should be coming to Meteorfall soon:

This guy is going to introduce some very interesting builds and new mechanics into Meteorfall soon. Can’t wait for Mulford to make his grand entrance! https://t.co/5RksCiM5Pc

Also, he posted a retrospective about the development of the game, sales, and a brief section on “What’s Next” that certainly sounds like there are plans for several more characters and cards.

The Early Days Now that Meteorfall has been out for a week, I wanted to do a retrospective of Meteorfall’s development cycle, as well as share some of the financials.  I’m sure he wasn&…