Raiders of the North Sea

i just wondered.
i had seen that your timer had been nearly filled up not long ago, and the next turn was an insta-move.
just the way it goes when A.I. takes over.
glad to hear that it did not happen.

I’m creating a 4P game with @LordGek (my first game; not sure about LG), so I’m looking for two additional meat shi…er, players. So, batter your battleaxe against your shield if you want in and state your friend code.

Friend codes aren’t necessary. Just let us know the game name and password and we can join. The game doesn’t use an invite system.

If we were all friends on there, we could do invites

Really? I don’t think I realized that! 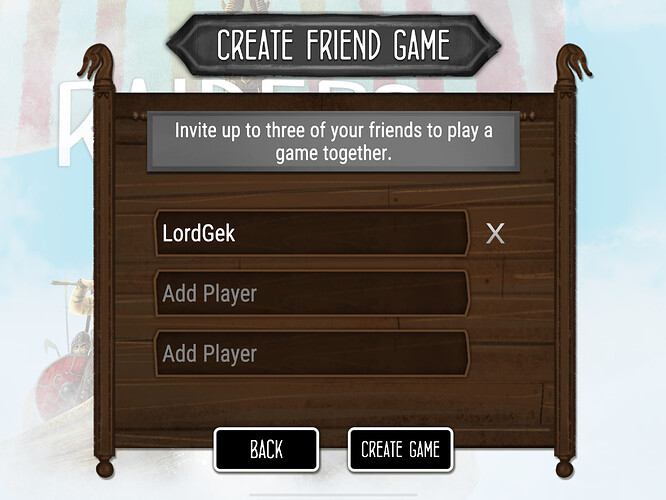 That’s great! Now if they would only give me notification sounds Dire Wolf would be firing on all cylinders! I emailed them about it and their response was that it is a system option, it it clearly isn’t for their apps, so someone doesn’t know what’s going on; it could be me, it could be a support rep, I dunno.

Once both are accepted, I’ll create the game.

@LordGek Friendly notice that you are about to run out of time. Not sure what happens in this app if that happens

The player is automatically kicked and the game continues with a bot, I think.

Or the game ends if it’s 2-player. I’m not 100% sure which, but I do know that you cannot continue if you run out of time.

Great game, everyone! But I don’t like how it doesn’t show the final turns after you’ve taken your final turn. I think Hardco stole my only gold from me on his final turn, but I can’t view it. Rolling those two 4s on that final battle and thereby claiming the second highest VP, Hardco, shot you past me. Curse the RNG!

Fun game, and the app is very well done (with the exception noted above and the occasional hang when loading one’s turn).

Good game! Yes, my final turn was to grab an extra armour and steal your gold. I think I only needed an average roll to get the second highest VP, so RNG worked as intended!

I think I only needed an average roll to get the second highest VP, so RNG worked as intended!

Does the app detail the sides of the red, 6-sided dice (“Avenging Dice”)? I don’t recall reading about them there. But according to the physical version’s rule book, it looks like the sides are 2, 3, 4, 4, 4, and 5.