Denizens of the interwebs! Boardgames fans! PC gaming fans! We have had an idea!

We, being Acram Digital and Mobo Studio, the folks who digitalized Istanbul into Istanbul: Digital Edition thought it would be a sweet idea to try and organize a tournament. So we pestered guys and galls from Pegasus Spiele (the publisher of the boardgame) and from Alderac (the publisher of the boardgame in the USA) and got them to sponsor the prizes. And some prizes those are, there will be two Istanbul Big Boxes, regular Istanbul boxes and a bunch of codes for our other digital boardgames to be won. So you know, it ain’t nothing!

At the same time we were pestering Dave @Neumannium who agreed for us to pester you fine folk in here about the matter in person.

So! Without further adieu! The registration for the tournament is live as we speak! It will last until January 4th, at which point we will figure out where we stand.

And here is the official post containing rules and other some such useful things.

We will be frank, it’s a first of for us. We just can’t know what type of turnout to expect, so we can’t share the exact format of the tournament yet. But we assure you, the aim is for y’all fine ladies and gentlefolk to have fun. It’s all we want. Prizes are cool, sure, but our main and secondary goal is just to organize something fun.

Of course in case of any questions - fire away.

Good luck with your Tournament! We do love a good tournament at Stately Play and Istanbul was only 1 vote away from being in our annual multi game tournament. Hopefully you should get a good collection of players from here.

Your rules page mentioned you were posting this tournament to board game geek too. Do you have a link please? Or did I just misunderstand that.

Also I think your hope that each game might last a week is probably a bit optimistic, but you do seem to know that might be the case. I’ve not counted the number of moves in a game of istanbul but I could easily imagine up to 60 total moves in a 4 player game. If the timezones/work schedules are a bit out for the players that might take longer than a week. I look forward to seeing how it does work out in the end

I will be signing up.

I’d like to say that this is such a great idea. Why other developers haven’t actively promoted their digital games with tournaments/prizes is beyond me. Maybe they have, and I’ve missed it, but good brainstorming, Acram!

I’m currently writing up a post for over there. Not sure if Acram is going to be posting something themselves on the Istanbul page?

Convinced me to buy. Signing up

We’re not writing anything on BBG, but a post, as Dave said, SHOULD appear.

Let me also say, it was a silly idea to organize this whole thing over Christmas, but OH WELL, we made our bed and we shall get a good night’s sleep in it, dammit!

Denizens of Stately Play! We have reached 159 participants of the tournament. One hundred and fifty nine! Just… wow. We did not anticipate such a turn out and words cannot express how HYPED (and a bit terrified) we are. Thank you, thank you all for signing up, sharing, and being the awesome community that you are. And of course thank you Dave for all your help.

Big love from us.

Now. We have to, obviously, process all the applications and figure out the kinks. We have a lot to process and plan (and that’s awesome!), a lot more than we ever expected, so we reserve a week for that. Expect further news as to who, how, what and why this Friday, that is January 11th 2019. We will be posting news on FB, twitter, Stately Play forum, Steam, our website, you name it.

Once again, you are AWESOME, and thanks to everyone who signed up for the event! 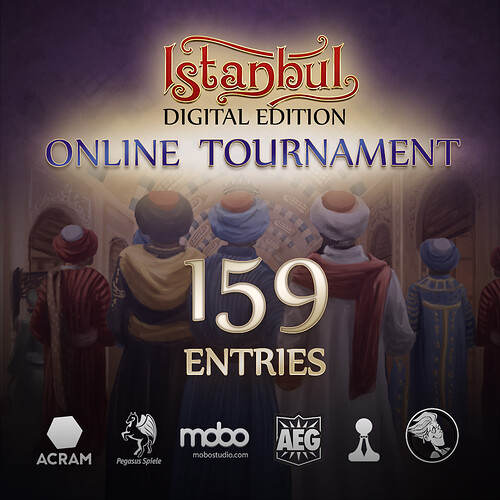 Good luck running it, and good luck to all participants. Good on you, Acram, for the great promotion!

Just a random update. Nothing’s exploded, no casualties reported, people seem to be having a good time. Some games are already finished, so it’s a plus.

I’m in the tournament and my game is going along quite nicely. One guy took 21 hours to take his first turn, and sure enough he eventually timed out on a further turn. One down, two to go.

I have noticed that the red badge on the app icon doesn’t seem to go away once I’ve finished my turn. A pretty common problem with async games, I don’t know why. I’ve also noticed that I get a couple of push notifications every time I have a turn. The second one comes about ten minutes later, as if to remind me it’s still my turn. For some reason this amuses me greatly.

From a competitive point of view I did have one cool moment, although it wasn’t at all cool for the other guy. He made a mistake when going to the fountain and forget to collect his assistants. I felt kind of sorry for him to be honest. One of the major benefits for playing at the actual table is that we could have let him take his turn back and do it properly. It’s probably absurd to code that kind of undo function into an async game though.

I’m also in the tournament, and everyone is still in the game! I don’t foresee us being done by Monday though…

To get rid of the badge notification, go back to the lobby after you take your turn. I believe it stops the second notification too. It’s not perfect, but it works.

Have we ever been told what the format of the tournament is? I’m assuming single-elim, but I don’t recall reading it…

I have taken one turn so far and waiting on opponent… 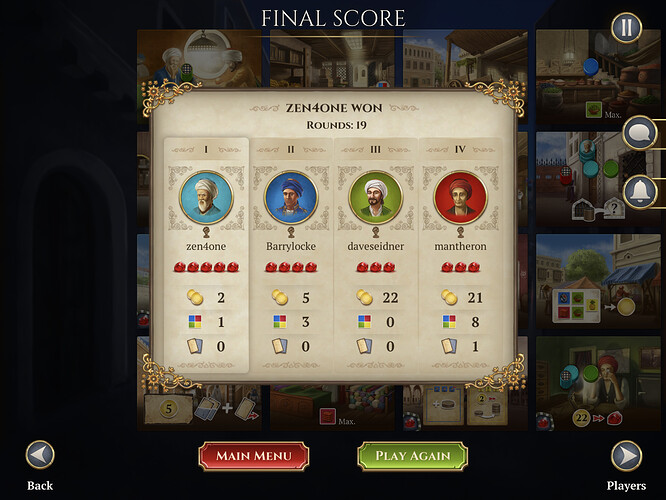 Tour41 results are good in. Everything went my way for once 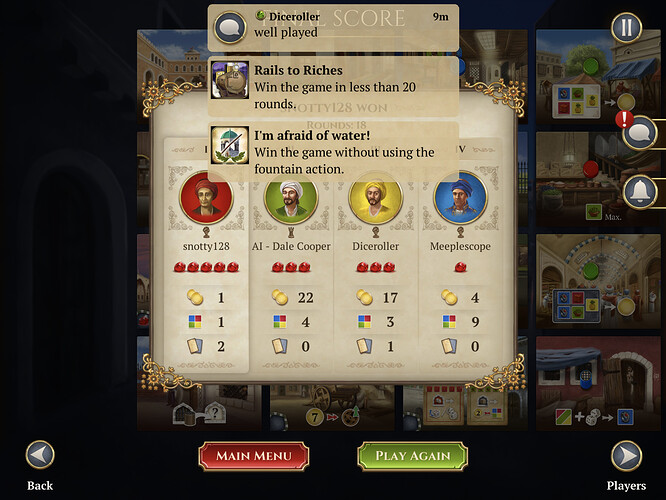 The tournament is as follows: first three rounds are Swiss-style, so no matter how well or poorly you perform, you still get to play. After those three games we go into the championship phase, that one is actually elim, with 12-20 best scoring players, depending on the situation.

So if the championship phase is 12-20 people in a single-elim format, and there were 159 people in the the tournament, aren’t we required to go 3-0 in the Swiss to finish in the top 20? So technically it is single-elim…

Do bare in mind people drop off

That and other reasons actually don’t make it as obvious as it would seem. Plus it’s not about the destination, it’s about the journey! 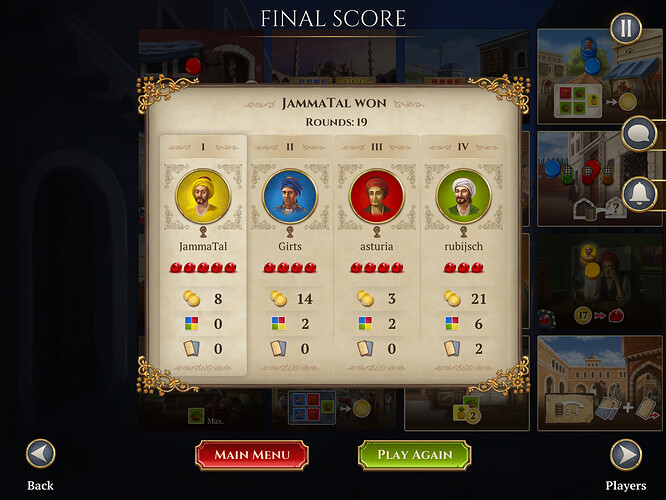