The devs are billing this one as FTL roguelike, with randomly generated planets and missions each play through. Pixel graphics, for those of you who are into that kind of thing, and there’s a playable demo. I’m about ten minutes into the demo, but at work so really haven’t delved into it. Starts with the cookie cutter backstory, you’re a clone of the best admiral ever, yada yada.

Demo only has one ship to choose from, it appears, then choose your crew and set out to figure out the great galactic mystery. Plays well so far, certainly worth a look from someone more skilled with the words than I, @Neumannium 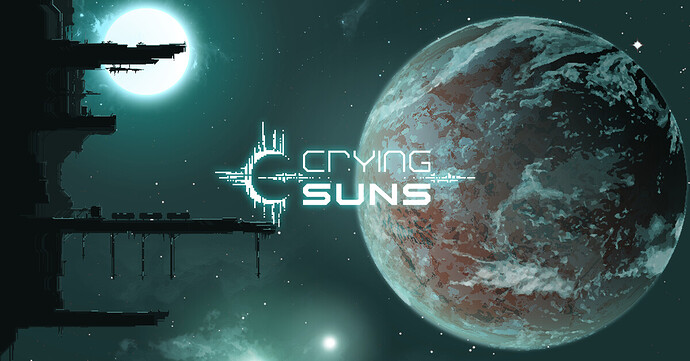 CRYING SUNS is a rogue-lite and tactical game where you explore a dying galaxy as a space fleet commander. As a deep story-rich game experience, each successful run will uncover a part of the underlying truth about the fall of the galactic Empire.

Demo can be downloaded from the link above, available for Windows and Mac. Supposed to be releasing later this year for those platforms and iOS, which is what initially garnered my interest. They turned to Kickstarter (I know, the horror) to fund the finishing touches, allegedly. Haven’t backed it myself, as I’ve grown leery of backing digital stuff on there.

In any event, the game seems worth a look from our keen eyed readers.

eta: seems Toucharcade did a better blurb than me a few months ago 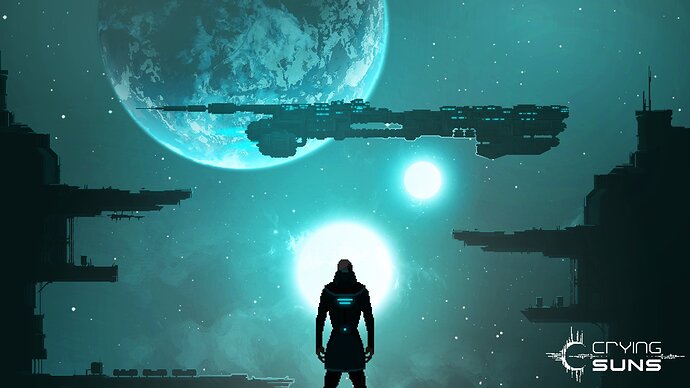 'Crying Suns' is an 'FTL'-Inspired Space Roguelike Coming to iPad

Played through the demo a bit. It’s akin to FTL meets Out There, in that you navigate your battleship around the “system” and each area you choose to explore has three to four places to “land.” You scavenge scrap for upgrades, maintain fuel, etc. There’s also a hex map for battles when you encounter other ships; real time combat with a pause to plan orders. You can deploy ships, fire your main weapons, and do something with your heroes that I have yet to discover, as I died before figuring it out.

It’s fun so far, if a bit clicky for the “dialogue.” My one critique would be that aspect - when you meet people, aliens, etc, a bunch of click boxes pop up for the conversation. Click one, rinse, repeat. The game does present you with some choices sometimes, but I have yet to play enough to see if your decision matters.

@Pitta… I caved and kickstarted it

Our top Necroposting is presented by… cough

So anyone played the release version? I got finally around playing it and I think its a pretty decent above average game. Clearly the FTL inspiration is strong in this one, but I have to say I dig the presentation way WAY more in this game than in FTL.
It is a given that the Management/Gameplay Loop in combat in FTL is way more complex in FTL than here, but that is an actual positive point for me since FTL got way too hectic for me personally.
The ship-to-ship combat is heavily in favor of Strike-Craft based combat and that is another plus for me. The Away Missions are also a nice little gimmick to break up the pace a bit.

Overall a nice game scratching the FTL itch pretty decently with way better presentation (pixel art (!) YMMV) and storytelling. I am not too far into the game and the overall plot makes me curious enough for plowing forward.

Awaiting the iOS release myself, but nice to hear that it’s not total garbage!

So anyone played the release version?

Our friend @EICJoe gave it a good write-up (I especially appreciated his positive nod towards Edge of Tomorrow / Live.Die.Repeat, which I also enjoyed

), but like @js619 I’m thinking that I’m more likely to find time to enjoy it on iOS, rather than it being one that I’d be inclined to fire up on the computer.

I think perhaps when I sit down at the computer that roguelikes are not on the menu, for me … sprawled out in the La-Z-Boy is when I’m more likely to consider a roguelike, on iOS.

Any idea when the iOS version is coming? I played the demo and really liked it, but it practically set my MacBook on fire.

“This year” iirc, from the devs. Take it with the proverbial grain of salt - it’s only been two years since the Kickstarter, they may need more time /s

Sorry I’ve been away on holiday so didn’t see this.

But yeah, I enjoyed it enough but if you don’t make good progress through chapters things can get a bit repetitive.

It is finally coming to iOS (thanks @geigerm) at 25 June 2020
I am quite excited about this, in fact I wasn’t as excited about a mobile release since the port of Halycon 6 Starbase Commander to iOS.
A shame about the current state of premium AAA and indi game ports/releases on the plattform.

I played and enjoyed the Steam version quite a bit and I plan to sink a LOOOT of time into this on mobile, since the plattform is just perfect fior this type of game.

Kickstarter blurb saying it’s a universal app for iOS and available on Android June 25 as well. Also says mobile version will have all DLC and future updates fwiw.

Some sources indicate crying suns will be iPad only 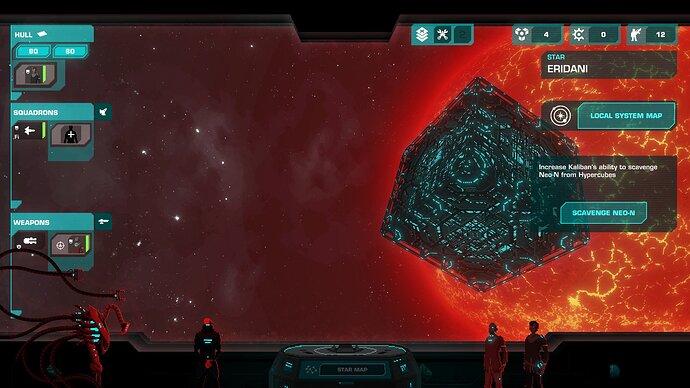 [appicon] Crying Suns was originally revealed back in 2018 as an FTL-inspired experience coming to iPad. Since then, Alt Shift's tactical space game arrived on PC platforms through Steam thanks to Humble Games (Humble Bundle's indie publishing arm)....

I think Toucharcades got that wrong, or are working from an old press release. The crying suns Facebook page says it’s on iPhone too

📢 BIG NEWS! 📢 CryingSuns arrives on mobile! When? 👉 June 25, 2020 Where? 👉 On iOs (iPad & iPhone) and Android Discover the announcement trailer! Don't miss the release, subscribe to get notified:...

Sweet thanks. Good to hear iPhone supported as well. Thanks.

It’s out and can confirm it’s universal, works well on my iPhone XS and iPad Pro. $8.99 in the App Store and it seems they’re handling giving it to Kickstarter backers through Testflight.

Kickstarter blurb also says the DLC is coming to iOS within a month or so.

Aaaaand it doesn’t work on my iPad.
I cannot check on my iPhone since the game requires iOS 13 and that isn’t supported with my old iPhone 6+