1775: Rebellion. Shall we defy Hexwar and try multiplayer?

I bought 1775 in the certain knowledge I’d never get to play actual people, but I’m feeling optimistic.

The multiplayer looks like the most pathetic uninterested implementation ever, with apparently no way to name games, set up private games, or do anything much. The reason I think this could work is that the multiplayer lobby is a howling wasteland, so the chance of an interloper joining are slim.

If anyone else has 1775 gathering pixel dust on their iPad, we could try doing a synchronised start so we all log on and join the (one) game In a relatively short time. If we get over that hurdle, then who knows how good the mp will be…

Its 4 player (2v2) right? Id buy it to make up the numbers if you cant find other people willing to play.

Im slightly concerned it might not work on my device, as it recommends ipad mini 2 or higher. it does say I can play on any old ipad, so I guess I could do a chargeback if it doesnt work at all

Hasn’t the multiplayer been recently upgraded , I wanted to buy the game but with the poor multiplayer review I decided not too , is it a sync ?
Ian

According to the PT review, the online multiplayer is async, but only 1v1, so team play is not present.

If we can find 4 people (and tbh @Snotty128 , I wouldn’t suggest anyone pay full price for the game right now), I’d suggest setting up two Stately Play identities and each team shares one ID and password. Each player can log in to play their half of the team.

Happy to also play 1v1 of course, to see how “well” the MP works

As @js619 already has the game, I’ve talked him into a test play. My Continental armies and patriot militias are even now gathering to assert their just liberties.

We’ll see how the rest of the game goes before I could suggest anyone else give their hard-earned to Hexwar.

As @js619 already has the game, I’ve talked him into a test play. My Continental armies and patriot militias are even now gathering to assert their just liberties.

We’ll see how the rest of the game goes before I could suggest anyone else give their hard-earned to Hexwar.

The Crown has asserted it’s grasp on the meddling, rebellious upstarts by seizing Maine on the first turn. Several thoughts so far -

My biggest gripe about this game is that I have no idea, nor way to easily find out, what my opponent did on his turn within the app. Completely unacceptable in a game of this nature…

Absolutely this. Last turns I attacked Boston, New York and, uh somewhere else with the continental army and followed up with the Militia. While the status of Bosoton is pretty clear, it’d be a feat of memory to work out the outcomes of the other 2 battles (I lost).

All your other points are spot on too. I couldn’t find a way out of the manual either. Not a great port…

The good people of Portsmouth have joined the side of liberty, with encouragement.

Thanks to my Hessian reinforcements and a convenient warship, they saw the error of their ways.

Curses. We recruit some Indians, as the revolution is starting to look like it needs help.

Edit: so the arrival of the Hessians was a combination of an event card in the reinforcement stage and the warship movement? Oh, for a game log…

Yes… played an event card in the recruitment phase for the Hessians, then had a warship movement for one army.

The loyalists moved first, and with their reinforcements and a warship moved from Nova Scotia to southern Jersey. Those south Jerseyans fell harder than pork roll versus Taylor ham and the Crown brought NJ back into the fold. I knew my home state wouldn’t let me down.

The British regulars got to move next, and another warship movement combined with Benedict Arnold helped me conquer RI with minimal losses. Benedict Arnold turned an American regular into a British regular, making the battle seven on three. A loyalist and two Americans fell in the first round, and I mopped up in the second roll.

A simple game log would make life much easier. I’m not even asking for a full replay here, just a text log ffs.

@SpiceTheCat moved… and I took my turn. At this point we’re in round 4 and I’m honestly not entirely sure what’s happening long term. I’m kind of just making the most opportunistic move I can as my turn comes around. Anyway, it was bloody, but I hold New Hampshire.

I also have no idea where we stand in terms of victory, since there’s no tracking and the map requires moving and scrolling to see control. Have I mentioned I can’t see the game when it’s not my turn?

Yes, sorry, downside of moving while insomniacal. In that turn, the French very kindly dropped by in Georgia and chased the servile lapdogs of the monarchy out of Savannah. Further lapdogs were expelled from Wilmington. Also I found out about the command move rule by leaving an area open for said lapdogs to retreat to.

I would also like an undo button for the movement phase, having mistapped already.

In my last two turns, warships carried armies from the south to Maryland, chasing the s.l.o.t.m. out of the colony, and to Nova Scotia where, goodness knows. Fishing boats shipped another half-dozen units up to the barren, yet aflame with freedom, wastes of the north.

Things that I like about the game (!) - the rule enforcement is clearly signalled, and the game isn’t held up by command decision moves (I guess we haven’t had an occurrence where a unit has a choice of places to move yet).

Oh, another gripe: I thought the game had hung when moving units from Savannah to Nova Scotia. Nope, it was just diligently animating a little boat chugging the length of the board, but off the bottom of screen and therefore invisible to me.

Oh, further edit- the colonies held score is actually on screen, at the top, currently substantially in Lord North’s favour. Can’t fault the app for hiding that

Ah, I’ll have to look again for that. It should be more in my favor after breaking control of Connecticut and New York

Agreed and all points - I chose a water movement and one point, then rethought my tactics and wanted to use a land card. No can do, the tiny ship was already in port. An undo would’ve been very nice.

And I had the same reaction when moving troops from Quebec to NS - thought it was locked up, but no. Apparently they took the scenic route around Greenland or stopped home for a bit in mother England. It took a good minute for the ship to move all of two or three territories…

eta: I’ve also found that the app won’t allow me to login sometimes, with it just leaving me on the sign in screen. It requires a force close almost everytime.

So, uh, I appear to have won. It’s all over bar arguing about the Constitution.

This is where a game log would be really really helpful.

To an outside observer, it might look a like a brilliant throw of the dice by a losing player, but I hadn’t read the game rules properly. I hadn’t quite grasped that the game ends when both truce cards for one side alone are played- for some reason, I thought all cards had to be played.

Bearing that in mind, when I looked at my cards, the only movement cards I had were both truce cards, and the forces of revolution were very much on the back foot, New England was beleaguered and my northern raid was looking a bit ineffectual. My thought was that by playing both truce cards, I was handing @js619 the power to end the game. As such, my plan was to tilt the colony control score as far as possible and ride out the counterattack.

In the Patriot turn, I generally consolidated, recaptured Connecticut and secured South Carolina. For the Continental turn, I reinforced in Connecticut with more or less everything plus an Indian reinforcement card. I retook RI in a bloodbath - well, not a bloodbath as such, more a mass sprint to the rear - cleared out the last Loyalist militia in North Carolina, and attacked into New York, New Jersey and Quebec. This gave me 5 colonies (Georgia, North and South Carolina, Connecticut and Rhode Island) to @js619’s 4 (New Hampshire, Maine, Nova Scotia and Delaware), and a surprise victory screen at the end of the turn. 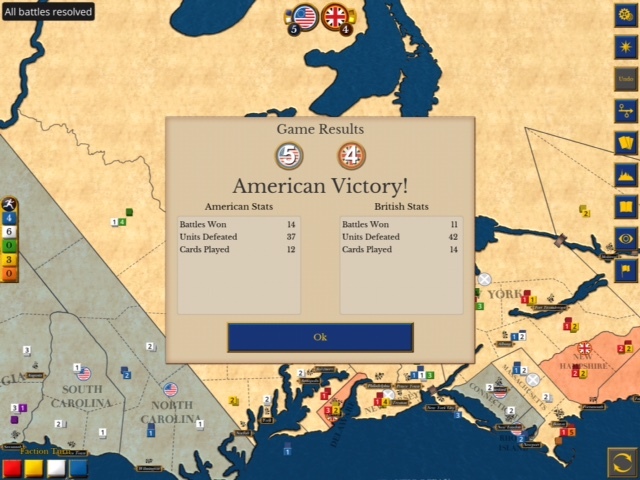 Would I like to play again? Yes, definitely, but entirely due to the original game, no thanks to Hexwar’s implementation. The fluidity and tension of the game is brilliant, there’s so much you want to do but not enough time or resource, and static fronts can change in an instant. Plus of course the dynamic game end conditions cough

Another game, @js619? We can do a turn by turn game log here to at least give a clue as to what just happened.

I’ve really enjoyed your AARs for what its worth. I’d love hexwar to churn out heavyweight board game titles in the same way they publish and produce wargames. Clearly there is some room for improvement.

@SpiceTheCat - this illustrates a key issue with the multiplayer implementation, in that I had no idea at all you had played either truce card! I played the Loyalists card in my second to last turn, but was completely unaware we were so close to the end of the game. At least that end!

Sounds like a well implemented and executed last turn on the part of the upstarts!

I would definitely play another game - agreed based upon the game and the stellar opponent, not upon Hexwar. I can safely say after this play, I’ll never purchase another Hexwar product again.

Let’s start it again, @SpiceTheCat. Kids have a birthday party this afternoon, but I’ll be around all morning and then afterwards as well to accept the game. And I like the idea of the turn by turn - I’ll keep pen and paper handy to keep detailed notes this time around, especially knowing that others are enjoying the read.

I’ll set up another game now. Some random joined the other game I opened, which will be practice. Might re-read the rules too…

If we report cards played and major battles here, plus any other points of interest, that should be a reasonable log. I think most other stuff should be inferrable from the game state?

Edit: game open, switched sides. The random in my other game has yet to move, which I suspect means the UI has defeated him.

The game not only appears to have forgotten my move, it’s forgotten my turn 0 deployments and redoing them hasn’t worked. I’ll try again later.

There is a log, incidentally. It’s the arrow-with-circles button, obviously. Just a text log, but it’s a start.