Developers have distantly flirted with the idea of a Warhammer 40K grand strategy, but the commitment to rendering a colossal empire management sim in the grimdark future has yet to be fully realised. It would be an interesting undertaking, and while perhaps some conversions and mods have offered glimpses into what might be, we’re yet to see one with the official GW stamp.

Along comes Gladius - Relics of War, from Pandora: First Contact devs Proxy Studios and published under the auspices of Slitherine, and while the game has aspirations to the grand strategy genre, it’s best described as a wargame. Or is that Waaaaarrrghgame? Apostates and the pious alike, read on.

Pandora was a great game, and certainly showed Civilisation: Beyond Earth what an Alpha Centauri spiritual successor should look like. Granted, it didn’t quite have the masterful sweeping narrative, but the sheer atmosphere and brutal environmental pushback was something to behold. Gladius doesn’t fall far from the tree, and about trivial difficulty, that serrated welcome grafts perfectly in the 40K universe. The once-pristine world of Gladius has fallen, and it’s on for young and old (and, like, really old), to reclaim the jewel. 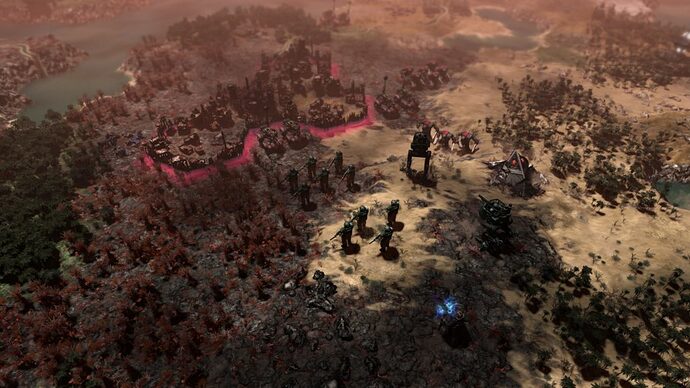 Available factions up for such a tilt are the Orks, Space Marines, Imperial Guard and Necrons. All deftly portrayed with just enough of a twist to make each gang of ruthless far-future warriors feel different on some level. The aim is to pound all and every enemy on the hex map into dust, so there’s not really the kind of focal spread you’d find in a Civ or an Endless Legend. No victory bar the one you wring from the smoldering remains of your foe. Every element, from the city building to relic-hunting in the wilderness, feeds into building up the war machine for hopeful conquest. The machine is hungry and must be fed.

Each game starts with a clutch of grunts and a cadre of city-founding units. Much like Pandora, the terrain features economic boons or deficits, depending on the hex and placing a city carefully is crucial for the early game. On higher difficulties, the early game can be incredibly punishing, with indigenous lifeforms shredding unwary troops as the colony begins to unfold. Gladius lets players put multiple buildings on one hex, which is absolutely welcomed.

But there are no real suprises here beyond some interesting little wrinkles in the economic and base-building game. Necrons can only spawn settlements on their antediluvian tombs. Space Marines are allowed but one city. The economic game isn’t nuanced, nor is the tech tree. And for some, that will be a sticking point.

But again, Gladius isn’t a grand strategy. Proxy Studios offers a gentle nod to the genre’s early establishment game, but pulls the pin for ground-pounding in a wargaming way. There’s morale and the flow-on effect on proficiency, terrain effects, proximity composition and good ol’ fashioned army positioning. I wasn’t huge on the 40K Panzer Corps riff, Armageddon, but for some similar unit shunting, I like the pace and crunch of Gladius. 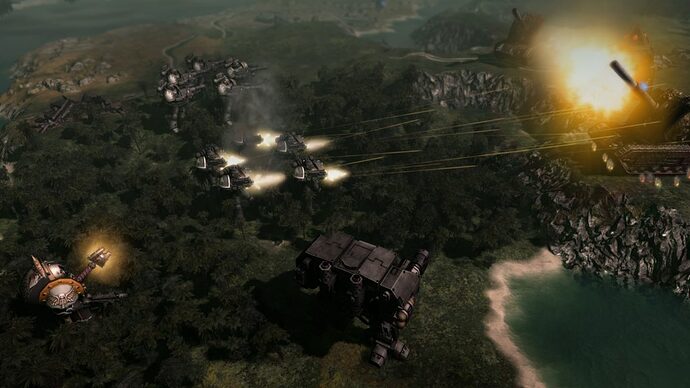 Relic sites scattered across Gladius’ pock-marked topography offer up interesting trinkets for hero units, such as passive bonuses for specific actions. Every platoon gains experience. Given the experience gained in the early game, there’s also no unit obsolescence and your old veterans will be crucial in the later phases. Related, the interface won’t leave you missing actions in the late game, when you’re swamped with innumerable tasks and an increasingly sprawling army.

If you’re looking for Civhammer 40K, this is not it. While I’m still interested in a studio one day tackling something of much grander scope - managing a sprawling galactic network of forgeworlds and shipyards and armies measured in millions - or something akin to Star Wars Rebellion’s asymmetry, Gladius is a comfortable operational-level slice of hexery. I suspect there will be more factions coming down the pipe to join the current frisson, but right now, there’s much to sink your chainsword into.

Great Review. I am all for more factions as well, since the current game lacks a bit of oomph in comparison to CiV 6 or Endless Legend. It may be an unfair comparison since the scopes and the budgets are definitely not alike between the 3 games but the Wh40k Universe has such a great variety of armies/races(etc that it is a shame not to have Eldar and the likes right now.

I haven’t played it all that much because I bought it on the same day I bought Wh40k Inquisitor: Martyr which got the lion’s share of playtime of both games but I truly regret NOT getting the Deluxe version of Gladius. The OST is simply fantastic (maybe a bit sparse) and the Deluxe version has the OST included…

In my book a worthy product. Which all by itself should say enough in times where this and this heretic scum dribbles out of the warpspace…

I am all for more factions as well …

Late to the party, as usual, I picked Gladius - Relics of War on a Steam sale, along with the Tyranid and Chaos Space Marines DLC factions, expanding the original four faction options.

I dunno if these DLC factions have been patched in as available to be encountered in single player for those who don’t own the DLC, but I’ve encountered both of them as NPC opponents in my initial game this weekend.

Visiting the Gladius Steam community, I see that word is that on a previous Slitherine stream they did say the Tau were being added to Gladius the first quarter of 2020, and now folks have noticed that Tau achievements have indeed been added to the Steam achievements list: https://steamcommunity.com/stats/489630/achievements

As well as in the game’s “Localization Strings” there are entries for not only Tau but Eldar, as well, leading knowledgeable folks to believe that Eldar will then follow: https://steamdb.info/app/489630/localization/

And, the T’au have been released, with time in the first quarter to spare, and not too far off the six month faction release schedule we’ve been seeing.

I often wait for DLC to come up on sale during one of the Steam sales, but I’ve gone ahead and picked up the T’au, despite not being a faction that I’m too familiar with, in the hope that doing so will help keep the spice flowing and we’ll see the Eldar next.

With it coming up on two years now since the last DLC for Sanctus Reach, I fear the chapter is closed on that WH40K entry, I’m hoping that Gladius continues to have enough life for more faction DLC.

In other news, I also picked up Master of Magic & the DLC now available on Steam, I’m still emotionally invested in MoM after all these years … what’s another game in my Steam library backlog, more or less?

Oh I played that at the very beginning. Kinda forgot about it since, but I do remember it being interesting and a solid 4X base. I may need to revisit that one!