Wizards of the Coast just unveiled Magic: The Gathering Arena. I have to go back and sift through the information again, but it looks like what you would expect from a developer with the biggest card game IP in their pockets who is looking longingly at the success of Hearthstone. Yes, it even looks a little like Heartbstone. So basically, it’s trying to be Eternal. Ok, I’m confused at this point but I guess that is what happens when the big boys are trying to play catchup with the innovative upstarts.

It’s free to play so I’ll absolutely be giving it a go, but I’m an it bummed that they dropped Magic Duels for this. I mean, when you get down to the nuts and bolts, what is the difference other than an attempt at streamlining the game to match its competition? It doesn’t take much for MtG to bring me back into the fold, so I hope they stick with this one and don’t abandon it (again) a few years down the line for the latest and greatest UI model.

It’s also PC only for the time being, though it’s written in Unity. All of the restrictions for Duels are gone, it will be a full fledged Magic the Gathering.

Overall…I’ll wait to see it on mobile (and keep playing Eternal).

Oops, probably not much use me signing up for the beta if it’s pc only. I read all those terms and conditions for nothing clearly

If this stays PC-only, I will eat the iPad I am typing this on…

I thought I was done with MtG with the exception of M13 Duel of the Planeswalkers for my MtG fix. I’m not sure what the spark was last year that fired my curiosity but I began exploring the possibility of getting back into MtG.

I quickly eliminated paper because I only played a couple of MtG face to face games, and that was back with a friend at uni in '94/'95, when we stayed up half the night playing casually with his cards (boiled down to whomever had the Serra Angel). Fast forward many, many years - 23/24 to be exact - and no-one I know plays MtG. Work and family life heavily restrict my time.

I initially considered MtGO, and then I heard whispers of MtG Arena and dismissed the idea because I initially wasnt interested in Standard. Yet I found myself reading MtG articles and getting addicted to ‘Alpha Investments’ YT content of all things (creepy Rudy). I also watched the odd Tolerian Academy (the Professor), episode also on YT over the last year or so (trying to scratch that MtG itch).

Then I read on Stately Play that a couple of forum members - @Kolbex amongst them - were playing on MtG Arena. I also ‘discovered’ Reddit at this time (as I’ve said before, it does take me a while with these things but eventually I come round. Eventually) - especially ‘AsiansGoneWild’ as a guilty pleasure - and started reading the Magic Arena sub-reddit. The excitement around the product and the meta in Standard drawing in old, new and returning players alike fired my interest.

I took the plunge a couple of days ago and have really enjoyed the experience (played 2 games - lost my first game with the janky blue Arcane Inventions precon deck, and then won my second game after deleting all of the precon decks and constructing a home-brewed W/G Selesnya deck) despite the awful New Player Experince [NPE].

The initial impression is a good one with the modern client in terms of play area, ease of play, animations, sounds, etc, although the female tutorial voice-over is annoying. Once you get past the 5 AI tutorial games, you are immediately dumped and left to your own devices with zero explanation of how Arena actually works - no explanation of the different tabs, profile, deck manager, how to obtain new cards, how the in-game currency works. Absolutely nada.

It was a combination of trial and error, Reddit posts, and finding a detailed run-down of how MtG Arena works on MtG Gamepedia (https://mtg.gamepedia.com/Magic:_The_Gathering_Arena).

In true Wotc fashion, we have not one but two types of in-game currency that are used for different purposes:

Players can purchase gems with real money, and true to form for F2P with microtransactions, the real life / gem conversion rate doesn’t quite match to the cost of events or packs i.e. you’ll be left with a residual amount.

You can earn free gold, packs, and cards through quests and event rewards. However, unless you win a certain amount of games (approx 2/3rds of matches) in ranked events, the entry fee will most likely exceed any rewards.

At present, cards cannot be bought or traded. They are only obtained from free cards provided with the 5 precon decks (can delete the decks - cards remain in collection), in-game card rewards, winning or purchasing booster packs, and turning in wildcards.

All sounds quite negative doesn’t it? The negatives are outweighed by the positives:

If it isn’t already obvious by the fact that I’m typing at 03:10 in the morning, I’m immersed!

That said, if you’re interested in MtG Arena, go into it with your eyes open to weigh up the positives against the negatives. Entry fees for competitive play don’t put me off because I’ll probably only enter an event no more than once a month - so looking at the equivalent of $4.99. Of course, if you’re willing to put time in doing the dailies to grind free gold and packs, you could self-fund event fees and card purchases (‘go infinite’), however it is in no-way easy and would probably require an initial drop of funds to buy packs to increase card collection and wildcards to obtain cards for a Tier 1 / 1.5 deck. You’d also have to win approx 2/3rds of event matches to break even.

MtG Arena allows me to play MtG the way I want to play, with an interesting and exciting meta, and without spending a great deal compared to paper (caveats above apply).

I now need a ‘blocker’ in real life - my partner has just put her head round the door and inquired what am I still doing up, and whether I intend going to sleep at any stage tonight / this morning.

Wait, is there really no in-game explanation of the interface? I had to go through like a 5 game tutorial when I started playing (I’ve pretty much stopped, by the way, sort of discouraged with Magic’s underlying flaws all over again).

The 5 game tutorials are still there but provide a glossed over intro to how to play MtG. Once you finish, you’re dumped into daily quests - still in the tutorial, although you wouldn’t know it - without a guided overview of the client, various tabs, how in-game currency works, etc.

I worked most things out with a combination of trial and error, but especially the mtg.gamepedia article.

I was surprised at the lack of guidance, especially given how easy it is to spend wildcards without realising what you are doing.

Whilst the actual play is easy and smooth, everything around it isn’t. The online resources loads up in a browser window outside the client. Same with payment. It’s all a little clunky.

I didn’t want to post this in the journalism thread, but I title this picture “Welcome to Platinum tier” 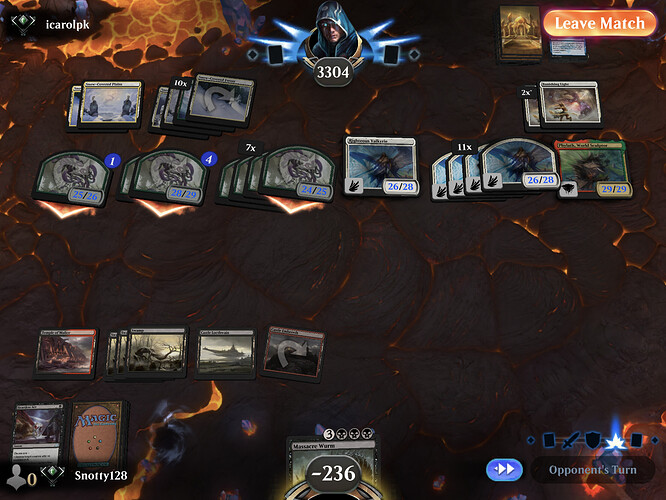 The irony being, had my castle emberth come up as a normal land, I could have played my massacre worm and I would have won

I would title that picture Power Creep.

You’re not wrong there. Back in the day, 7 mana used to get you a 7/7 flying trample card, that you had to sacrifice a creature to every turn or take 7 damage.

These days 7 mana will get you an 8/8 hexproof kraken that taps all your enemies creatures with no untap for one turn, and then takes control of one of them.

The power level of the cards is worlds away from the magic I used to know.

A vast majority of my rare cards - and I have thousands of cards - would be uncommon at best these days. The only old cards that are anything special tend to be mana related; dual lands and mana accelerators are always useful.

I don’t sink much money into Arena when there are real cards to buy, so this is based more on collecting the physical cards than being competitive online, but the Forgotten Realms set is awesome from a pure nerd/nostalgia point of view. I think maps and treasures and the d20 shake up the game a little too much for me to say I love the set mechanically, but I love the theme and how well they mashed up the two properties. And class cards rule!

I am not a fan of the Jumpstart: Historic Horizons.

I want my Magic Arena to mirror as close as possible my physical magic cards. I’m not a huge fan of the idea of digital-only abilities.

That said, I can live with some of them. Persistently changing a card isn’t that crazy. In fact, it is theoretically doable physically.

My biggest issue is with the conjur ability as it is bringing Magic into the Hearthstone realm of RNG madness. I despise how many abilities in Hearthstone create random cards and ransoms effects - it killed the game for me. I don’t want to see that in Magic.