Just when I thought I was out, Slay the Spire pulls me back in

PC/Mac/Linux, Xbox, PS4, Switch While I haven’t completely stopped playing Slay the Spire, I will admit my weekly numbers are down. In fact, other than plane-trip-long sessions on my Switch, Slay the Spire has been mostly ignored. Somehow, I had managed to slip free of the shackles that Slay the Spire’s relentlessly addictive gameplay had…

Recently remembered I own this and fell back into it again. I wish I could get it on Switch, but not for £20.

It is best played on switch to be honest. And I own it on steam, PS4 and switch (ashamed face).
I’d still buy it again if it would ever come out on iOS. It must be amazing on an iPad or iPhone.

As much as I love this game, I’m fucking terrible at it.

Took about 5 tries to win with the new character. I like it, was a lot of fun and has an interesting play style. I ended up stacking reserve damage until I could knock things out while blocking up until that point.

I like the new character quite a bit, too. Being able to stack up enough damage using Wrath to kill a baddie before they even get to go is kind of cool…

I’ve made it to the final boss a couple of times, but I still can’t get that final kill with her.

Of course, I’ve only won with the Warrior (I forget the name of the class) anyway, so what do I know?

I can rarely win with the Ironclad. I split wins pretty evenly between the Silent and the Defect. The Defect is the easiest IMO, but of course it depends on getting the right card picks.

Been playing for a while now. Have never won. I’ve come a long way past just spamming Anger as the Ironclad, but the only way I’ve been mostly successful has been reliant on a couple of key cards (Barrier, for instance), though lately I’ve been going fully mental with Demon Form and just dish out so much damage as to blow through fights before taking much in return.

Got to the final boss as Silent, with a really nice rolling block system plus handfuls of cheap upgraded Shivs, and loads of energy generation.

The Defect is really interesting. I initially sidelined the Orbs, but I’ve been trying to either concentrate on Dark for damage generation, or just rapid cycling in order to take advantage of the constant evocation. Also love Genetic Algorithm (?), FTL, and 0-cost claw cards.

For all of them, I think expanding max HP is a bit of a waste of time, and you should cull all your starting strikes ASAP as all they do is water down your deck? 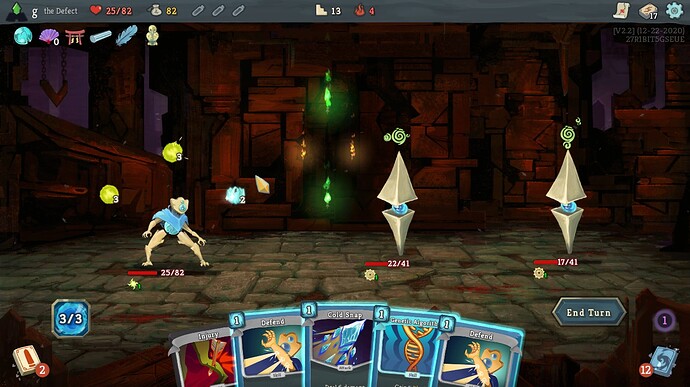 20210409071847_11366×768 233 KB
The game continually has things to surprise me with, despite the fact I’m 300 hours in. The Torii + Tungsten Rod combo has meant I’ve started to take zero damage from most fights, dropping damage that’s 5 or less to 1, and then reducing all damage taken by 1, with judicious use of Blocks and Leaps and a few Ice orbs to manage the hits. Negated damage still activates the Static card though, which means I’m taking 0 damage, and spawning a new Electric orb every time.
2 Likes
Mirefox April 9, 2021, 1:04pm #11

I love that eureka moment in these card-based dungeon crawls where some combo suddenly clicks and you find something that just might help you win.

A couple months ago I milked Meteorfall Journeys for everything it is worth. When I started the game, one specific card didn’t make sense to me - Body Slam. You lose half your armor and do that much damage. No thanks, I need my armor to win. Fast forward a hundred games or so and Body Slam was easily my most broken card and I could always count on being an invincible juggernaut capable of literally infinite damage.

I’m playing Meterofall Krumit’s Tale right now and haven’t yet found that combo that clicks, but I’ll get there.

Slay the Spire is fun but it is still more in my backlog than not but I look forward to plumbing it’s depths as well.