Great Idiots of History: I Know There's Such A Thing As Hindsight, But Fucking Hell

Ladies and gents, it is my extreme displeasure to present to you a man so fundamentally mistaken that he makes Tom Friedman look like a predictive genius. While it is fair to say one needs to keep in mind the problems of presentism and how things always look obvious once they are almost a hundred years away in your rear view mirror, there are some mistakes that are just inexcusable, occurring on a level of denial similar to Stalin denying Hitler would ever invade, only with extra wilful stupidity. You can stop me if you know this one (you can’t, fuck you), but otherwise go along because it’s a nice Christmas treat.

To set the scene a little: It is the Weimar Republic in the 1930s, a weakened state mid-crumble after WWI, built upon unsound foundations, where the state and the populace are broadly right-wing and authoritarian by habit, if not by choice. Persecuting Jews and communists are the most popular hobbies amongst a certain slice of the population, and after the abdication of Kaiser Wilhelm II, the state and aristocracy are shitting themselves in fear of a Bolshevik uprising, which happened in a certain country not very far away and not very long ago. The Socialist Democratic Party is the largest Marxist political party in Europe and arguably consistently the most popular party in Germany since 1919.

Amidst financial and economic instability, decidedly not brought about by the Treaty of Versailles (that’s a Nazi talking point), there has been considerable unrest and outright streetfighting between the SPD/KPD (Communists), and the police/German armed forces/militia/veteran’s organisations, including the charming men of the Sturmabteilung, the meathead wing of the little party that could, the NSDAP, known to all an sundry as the Nazis (notably, the Nazi party was decidedly not socialist, just in case you were wondering). The state wants to control the unrest with an iron fist in an iron glove and cannot quite work it all out.

Hands up if you know who this distinguished-looking chap is? No image searching now. 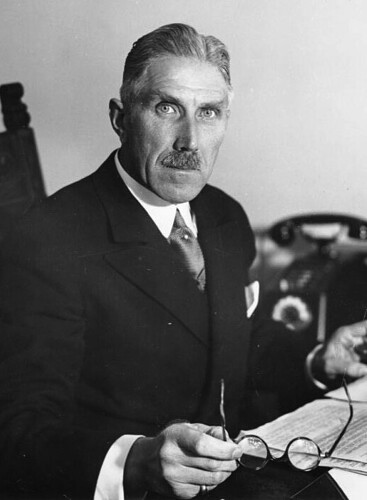 fvp516×702 53.7 KB
Franz Joseph Hermann Michael Maria von Papen, born in 1879, into a wealthy noble Catholic family, Prussian military education, joined the German army, served during WWI, and appointed Chancellor in 1932 by President Paul von Hindenburg, where he lasted less than six months (mostly not his fault, to be fair). If you know where I’m going with this, stick with it, because it’s extremely funny just to see how wrong one man can be about something.

Please bear in mind that Hitler published Mein Kampf, which set out exactly what he wanted to do, in 1925-1926. Papen has the regrettable habit of disagreeing with everyone else when it comes to what he said about certain things. If that makes him look like a fucking clown, reader, then that is almost certainly your problem.

Well, so what, who are you going to believe? Hitler? Thankfully you don’t have to, because trusty Joachim von ‘Pranks, Molotov!’ Ribbentrop sat in on the meeting with his wife, and took notes.

In a country struggling to stabilise itself, it’s generally seen as unwise for members of the establishment to have secret meetings with political ideologues, so notwithstanding the unacceptable rate at which these meetings were leaked immediately to the papers (or as in Papen and Hitler’s first case, photographed), they continued apace. von Ribbentrop, as Hitler’s confidant, was often included, and his properties often used, and anyone with political juice could be drawn in, including friends and relations of the principals involved. This included Oskar von Hindenburg, Paul’s son, who was one of a great many people not buying what Hitler was selling.

Pushed into being slightly less opposed by his possible involvement in misuse of government funds meant for ailing farms being used on fast horses, cars, and women, he was there on the 22nd of January for another secret meeting.

The results were entirely predictable.

On this same day, 35,000 members of the Sturmabteilung held a demonstration outside of the KPD headquarters.

The political manoeuvrings here are considerable, as the struggle to form a working government is messy and becoming more so; Kurt von Schleicher, current Chancellor of Germany, failed to form a coalition, had his suggestion for a benign military dictatorship rebuffed by Hindenburg, and his proposal to ban both the NSDAP and KPD denied by the very same. Schleicher tries one last time, asking Hindenburg to dissolve the Reichstag, delay elections, and allow him to govern, and is yet again denied, so he pulls the pin. Hindenburg feels there is a need for a broad coalition to govern, and after Papen refuses to become Chancellor again: 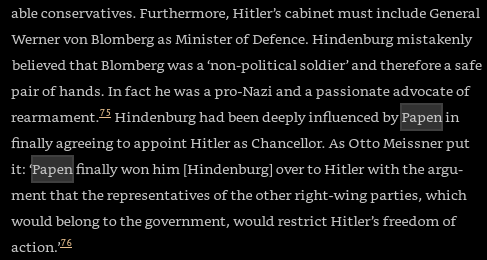 Yes indeed. “Don’t worry, we hired Hitler.” may not be the reassuring cry one thinks.

Ladies and gents, I don’t wish to alarm you, but that cad Hitler was, in fact, lying. I hazard that this was, in fact, not the first time this had happened, and nor would it be the last.

This remark of Papen’s is over-reported, but it shows how Hitler was never sincere when face-to-face, something that a great many people, even those who opposed him, failed to grasp. Quite a lot of people fell for his facade, which with Papen and others, was that of a reasonable man looking for do the best for Germany, rather than merely a furious ranting gobshite dead-set on power, who had set out his goals, literally on paper for all to read, years before. Being able to fake sincerity so well was invaluable. Only those at some remove had a slightly more clear view of things.

What followed was an absolute storm of political violence, as the KPD was rendered helpless using all means possible, including beatings and murder, political disenfranchisement, and the widespread persecution of anyone who was not on the Hitler Bus by the SA and SS. On the 20th of March, Dachau concentration camp opened for political prisoners, basically because the Nazis had rounded up too many people and were just keeping them in basements, where they were poorly fed, irregularly watered, regularly abused, and often died of their injuries.

A failure of the imagination is getting off lightly, for Papen, I feel. He eventually saw, as far as he could, the error of his ways. On the 17th of June, he made a speech. 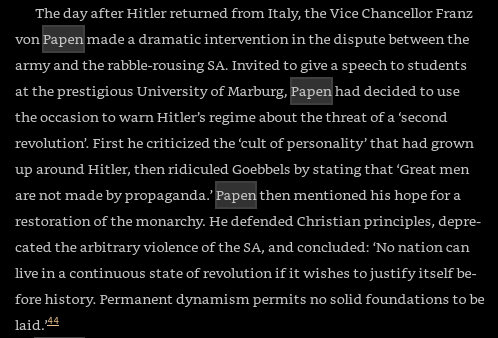 He didn’t ask to be a hero.

As a result, the co-writer of the speech, George Jung, was arrested and shot by the Gestapo. Papen’s press officer, Herbert von Bose, was shot by the SS. Joined in excellent company by Schleicher (and his wife, who was shot ‘accidentally’) and many, many others.

Papen was placed under house arrest. He survived the devastation of Germany, was found to have not done much that was provably illegal at Nuremberg, received eight years hard labour from a West German court, but was released in 1949, and published his memoirs (“No, I Wasn’t Wrong About Hitler, You Were.”) as soon as he could, spending decades arguing with historians that he never did anything much wrong at all. He died in 1969, probably from choking on what he insisted was a grape rather than a pineapple, or something equally stupid.

This is amazing. Thank you!

I’m pleased people have enjoyed it, Weimar political history is a hobby of mine, and I find it fascinating that the odds-on favourite country to have a socialist revolution at the time was Weimar Germany, and precisely because of this, a bunch of fascists grabbed power. If Papen hadn’t been MVP (Most Von Papen), it’s unlikely Hitler would have been Chancellor. The Nazi party simply was not popular, even at its height.

I may do some more if I find the time and inclination.

Well, it couldn’t be more topical, at least in the US. The closest I’ve come to this history has been Jason Lutes’ Berlin graphic novel series and Erik Larson’s The Garden of Beasts. Jochen Bittner’s recent op-ed was great, I thought.